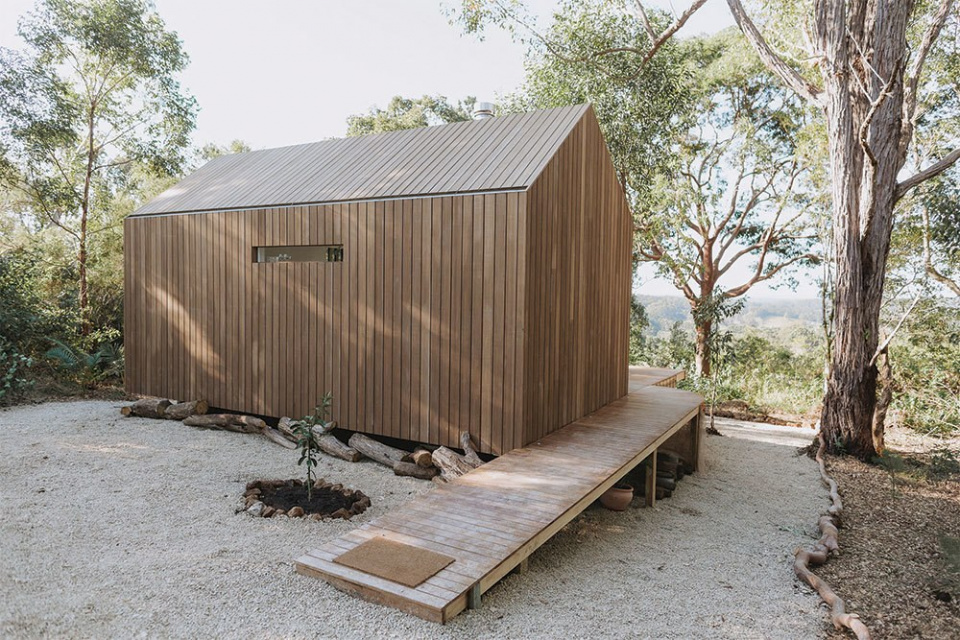 Based near Byron Bay, Salty Builds and Salty Stays is run by an energetic trio who make every decision based on how it will affect the Earth. This ethos led them to choose Abodo’s FSC®-certified Vulcan timber for the cabins at their eco retreat.

It was during a late night scroll through social media that Salty Builds and Salty Cabins co-owner David Wilkinson came across Abodo’s Cardrona Cabin in Wanaka. He and his wife had leased a piece of lush, hilltop land near Byron Bay with a plan to build minimalist cabins for holiday makers, and were looking for inspiration for materials.

“I landed on a New Zealand build that had used Abodo timber for its roof, and it was like finding the key to my lock,” David says. “I had dreamt up this timber-clad cabin design but couldn't find anything local which would stand the test of time on the roof. European products, yes, but I couldn't stomach the carbon footprint associated. It was a thermally treated product that I was searching for, and Abodo completely fit the bill.”

Armed with this solution, Salty Stays created The Cabin, an off-grid, self contained and very Instagrammable escape on the hilltop, built using Abodo Vulcan timber battens with a Sioo:x finish.

The Cabin enjoys uninterrupted ocean views from its elevated site and is kitted out with solar power, a comfortable queen-sized bed, fireplace, kitchenette and breakfast bar, and a bathroom with shower and composting toilet.

“The inspiration for our design was the old zincalume-clad worker’s sheds scattered along the coast where we lived,” says David. “A perfect silver/grey gable, so we chose the Sioo:x coating to encourage the greying process. Six months in, and our cabin is almost there. Cooking away to the perfect grey.”

Sioo:x is a silicate-based wood finish that is designed to silver off over time, meaning it requires very little maintenance and can last up to ten years before needing to be reapplied. Created using FSC certified New Zealand timber, Abodo Vulcan is locally made and thermally modified for increased stability.

Abodo products are also carbon negative, a huge plus for eco-friendly builds and a must if, like Salty Stays, you are looking to go carbon neutral. Members of 1% for the Planet, Salty Stays also plants a tree and donates to Sea Shepherd Australia for every booking made. 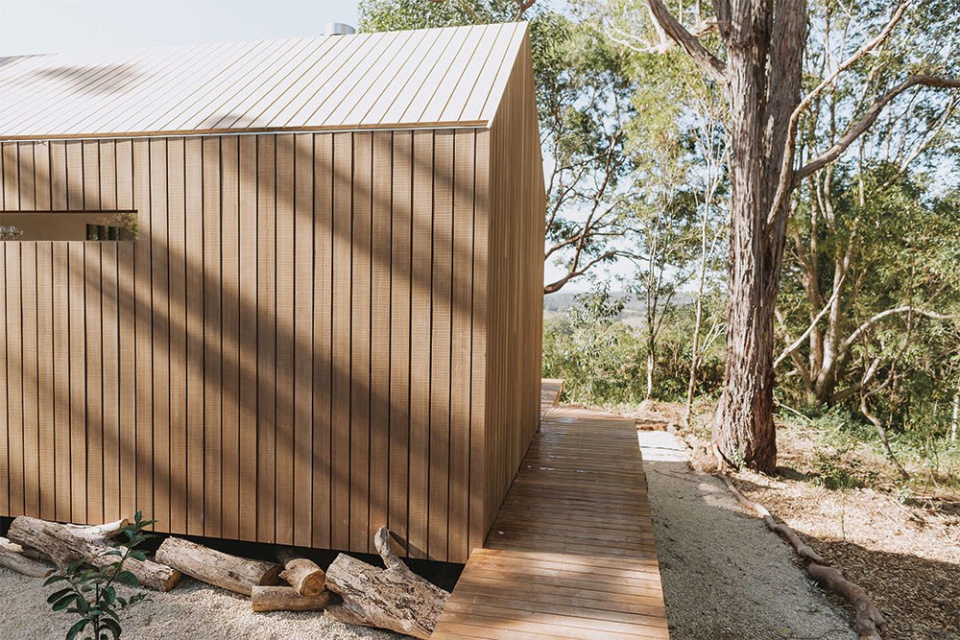 Aside from Salty Stays, David also runs Salty Builds, a business that creates flat pack cabins to order. Among Salty Builds’ offerings is The Weekender, a copy of The Cabin at Salty Stays. To make this business work, the cabins need to be lightweight.

“The Abodo Vulcan planks are lightweight and extremely malleable. We push the limits at every turn with our builds and so rely on products to swing with the punches. This cladding system did just that,” says David.

The popularity of Salty Stays shows that for many modern city dwellers, getting back to basics and spending time in the wilderness is the ultimate indulgence. These cabins provide a base from which to do so, with the right level of comfort in a natural environment.

Book a cabin stay here or see here to put a cabin in your own backyard. 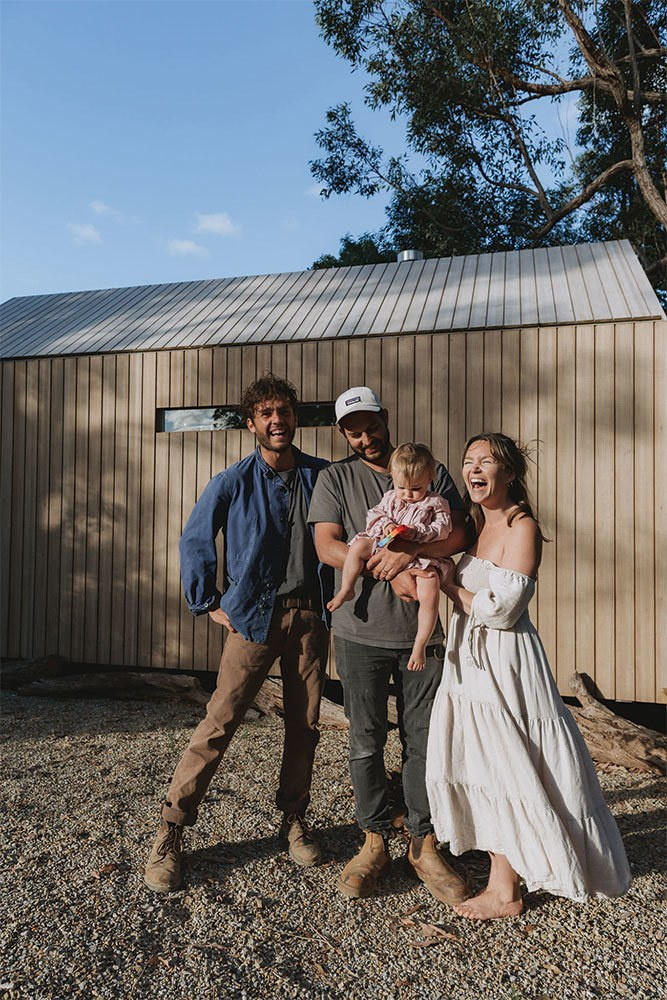 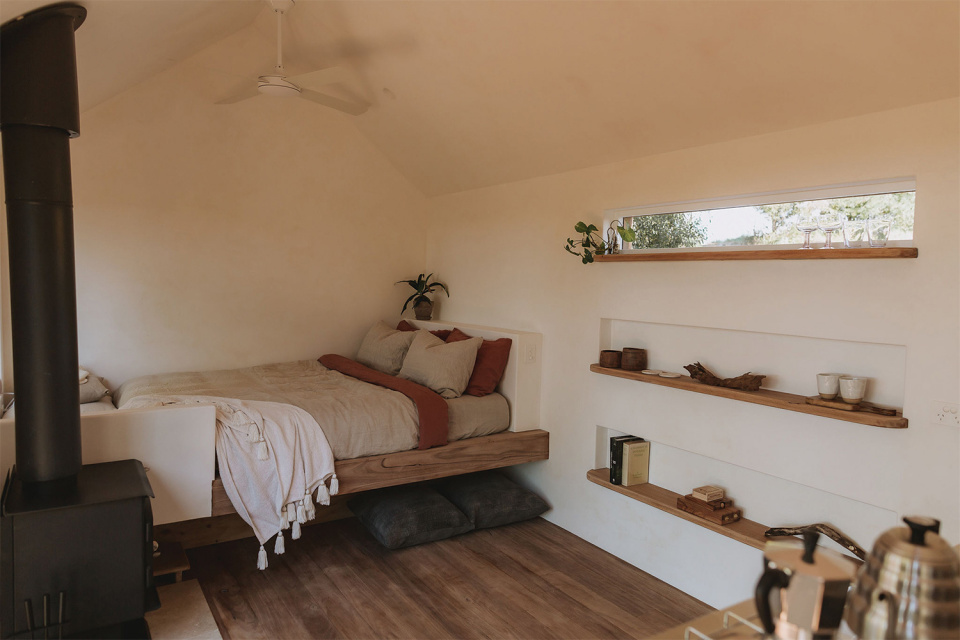 The Cabin is perfect for couples looking to escape. Every booking generates donations to Sea Shepherd and plants a tree. 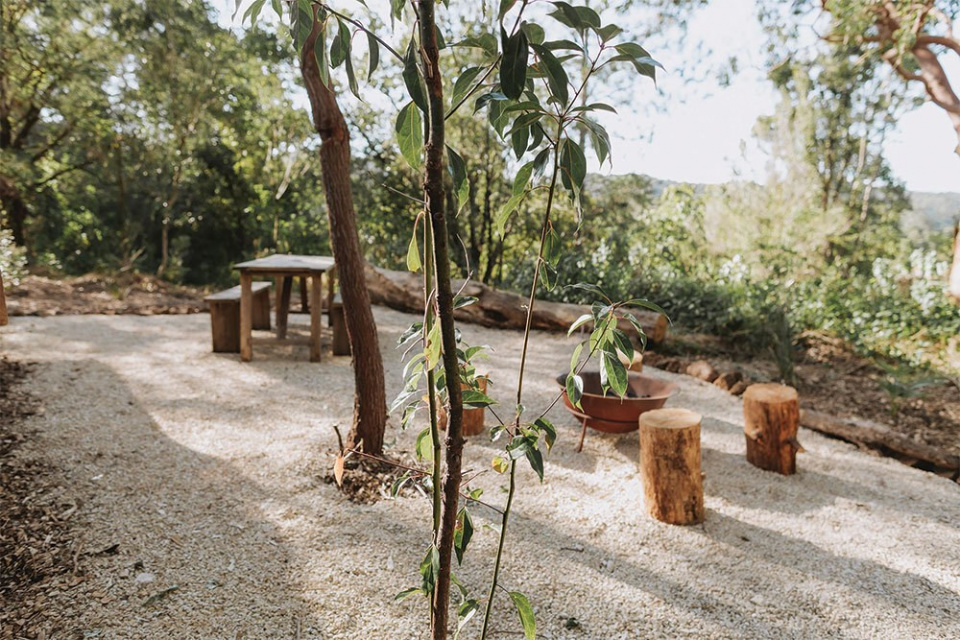